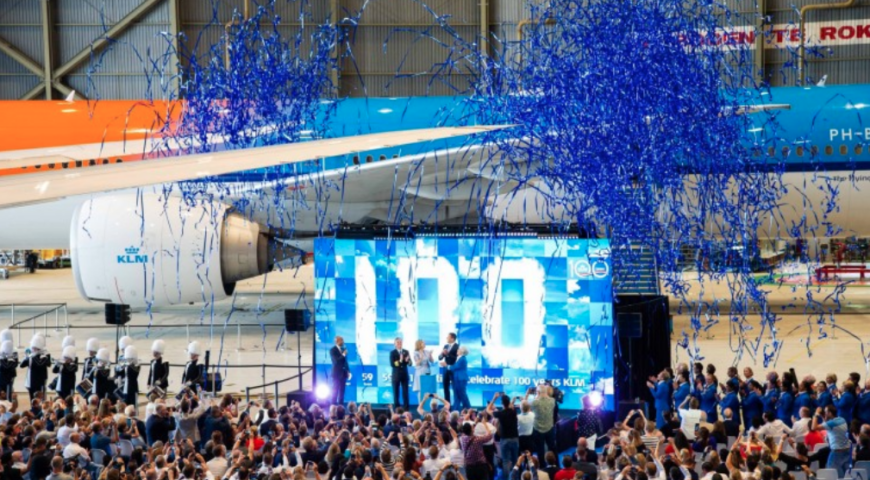 KLM turns 100 — one of the oldest airlines in the world!

The Dutch airline KLM celebrates its 100th anniversary this month! It was founded on 7 October 1919 and its first flight touched the skies on 17 May 1920. It became one of the oldest airlines in the world still flying under its original name. KLM stands for Koninklijke Luchtvaart Maatschappij in Dutch, which means “Royal Air Transport Company”.

In 1919, KLM started by launching a cross-channel flight to connect Amsterdam and London. In 1924, it performed the first intercontinental flight to Batavia, Indonesia. In 1946, it also pioneered flights between Europe and New York. Today the Dutch company connects 165 destinations by offering short and long haul flights from its hub in Amsterdam, at Schiphol Airport (AMS).

In 2004, the airline became part of the Air France-KLM group, besides a member of the SkyTeam alliance with Delta Air Lines. “We were the first airline to look for partnerships and alliances, an example that was later followed by many other countries and airlines,” explained KLM president & CEO, Pieter Elbers, during the 100-years party that took place in the hangar 10 of Schiphol airport this Monday.

Did you know that KLM distribute 800,000 Dutch gin houses to the business class every year? They are a huge success in the Netherlands! It’s a marketing idea born in the 1950s that still work well these days. The porcelain cottages were launched as KLM’s toast to its business-class passengers, helping sell tickets at a time when flying was still few. Now, with the 100th anniversary, also the 100th house was present during the anniversary party. 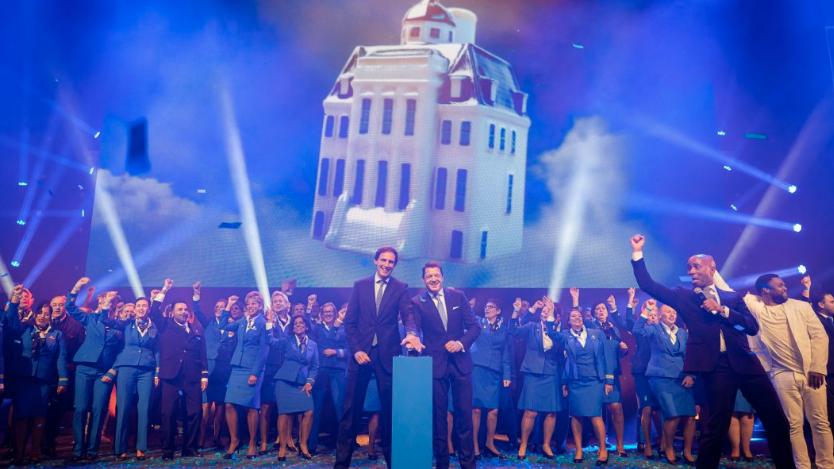 “They were the reason why so many Dutch people, especially men like me, spent a little more on the plane ticket,” said the Dutch Finance Minister, Wopke Hoekstr, who closed the anniversary ceremony that took place at Amsterdam Schiphol Airport hangar 10.

KLM future seems quite promising. Investing in new technologies, the company has just announced the “Flying-V” plane project. The model intends to incorporate an airliner’s wings, fuselage and cabins into one unit, completely overhauling the look of a plane as we know it.

The Dutch airline partnered with the Delft University of Technology (TU Delft) to create a efficient long haul plane. “Over the past hundred years, KLM’s entrepreneurial spirit and quest for innovation have played a pioneering role in the aviation industry. Our centenary is an opportunity to reaffirm our commitment to our ambition: to become the most customer-centric, innovative, and efficient European network carrier with a deep-rooted determination to address the challenges that lie ahead,” stated Elbers.

TU Berlin student, Justus Benad, developed the Flying-V idea while working on his thesis. Nowadays, 2.5 percent of total global CO2 emissions come from airplanes. Carbon emissions from aircraft are becoming a real problem, as we often fly far away from home to work or for leisure. The Flying-V promises to reduce operating and environmental costs, by using 20% less fuel than the Airbus 350, currently the most advanced passenger plane. Still, the actual deployment of the Flying-V project is estimated to happen in 20 years time. A reason to celebrate in the near future.