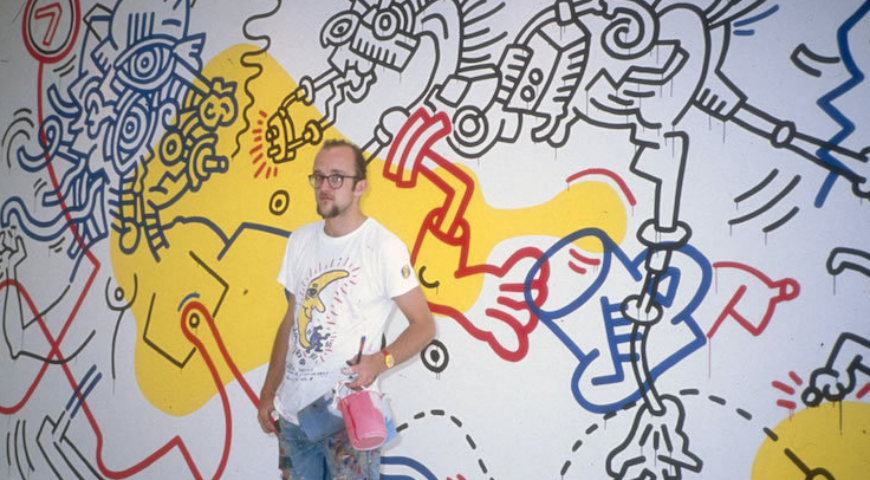 Did you know that, in the late 1980s, Keith Haring painted murals, took part of exhibitions and enjoyed his Summer in Belgium and the Netherlands? Yep, the iconic pop artist travelled several times from New York to leave his traces at this side of the Atlantic ocean.

His Low Lands adventure started thanks to an invitation by Antwerp gallerist Emmy Tob, who exhibited Keith’s work in 1983, and also by the Knokke-based collector Roger Nellens, who organized an exhibition at the Knokke Casino.

In Brussels, Keith once opened a “Pop Shop”, a store concept he created to make his art more affordable. “If I only made paintings in a gallery I would probably be frustrated. (…) The Pop Shop makes my work accessible. It’s about participation on a big level,” said Keith.

Keeping his art just at galleries was indeed not Keith Haring cup of tea. That’s why he not only exhibited his work several times between 1987 and 1990 in Antwerp galleries, but also left his mark at a cafeteria… from Antwerp’s Museum of Contemporary Art (M HKA).

About this life episode, he writes this funny note in his diary:

2.30 p.m. Begin painting mural on wall in cafeteria. Press opening for museum is ending, but some photographers arrange to return. The wall is very smooth and some of the paint is difficult. I have to get pigment and ink to add to the black paint for a more dense line. I finish mural in 5 hours. The lady working in the restaurant is amusing, but seems genuinely thrilled by the addition to her cafeteria. She keeps offering me soda + beer + food (…)”

A couple of days later Keith Haring painted a container at the surf club Channel in Knokke, a Belgian beach city he would come back again to enjoy more summertimes. The container first served as a storage place for surfboards, but two years later the container was gone. Only in 2009  the artwork reappear at an exhibition. It turned out that “the lost container” had been sold for about 40,000 euros. Later, in 2017, the same container was sold for two million euros!

After his solo exhibition at the Stedelijk Museum in Amsterdam in 1986, Keith painted in just one day a huge sea creature on a wall next to the cultural institution. It became Keith’s biggest mural in Europe, measuring 15 by 13 metres. The wall belonged then to the museum depot, but today is part of the Amsterdam-West Food Center. The painting fell into oblivion and spent 30 years covered by insulation material… And it only came back to light last year! The good news is that the museum arranged restoration work to start in April 2020 and it will cost around 180,000 euros.

👉TRAVEL TIP:  You can discover more 85 iconic Keith Haring works at Bozar in Brussels. Not to miss: